Tea chemistry is complex. Just how complex? Well, on the bush, tea leaves contain thousands of chemical compounds. When tea leaves are processed, the chemical compounds within them break down, form complexes with one another and form new compounds. When steeping tea leaves, our senses are tingled by the thousands of volatile compounds (collectively known as the “aroma complex”) rising from the tea liquor and the thousands of non-volatile compounds that are floating within the tea liquor. Because of this, tea is known as the master of chemical diversity.” Much of tea chemistry from field to cup is yet unknown! 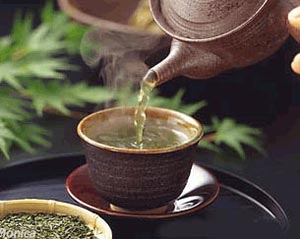 So all of this makes it very difficult to generalize and say that x chemical is responsible for y taste. Many tea chemicals have been categorized into broad groups, and collectively we have some idea of what happens to these groups during processing and what flavors and aromas they are responsible for. Undoubtedly, as tea gains popularity, more research will be done on tea chemistry and we’ll have a clearer picture of what is going on chemically from the field to the cup.

Plant leaves are made up of mostly water, and they begin to wilt and lose water when they are removed from the plant. Tea leaves are no exception to this. Once they are plucked, the leaves begin to lose water and wilt, a process called withering in the tea industry. As tea leaves wither, their cell walls begin to break down. The chemical components inside come in contact with oxygen, spurring on a group of reactions we call oxidation. Over the years, tea producers have learned to control the natural tendency of tea leaves to wither and oxidize in order to produce a finished tea that has a desirable appearance, aroma and taste. This is accomplished using methods we’ll refer to as tea processing.

Amazingly, for hundreds of years tea makers have produced drinkable teas using principles of withering and oxidation with no knowledge of the underlying chemistry. From what we know today, the most important compounds in fresh tea leaves are polyphenols, amino acids, enzymes, pigments, carbohydrates, methylxanthines, minerals and many volatile flavor and aroma compounds. These components are responsible for producing teas with desirable appearance, aroma, and taste. During tea processing the various compounds undergo changes to produce what we’ll call a finished or made tea – one that has been processed and is ready for packaging or steeping. Let’s take a look at each of these compounds, beginning with the most abundant, polyphenols.

In steeped teas, polyphenols are largely responsible for astringency, a taste experience that causes a drying sensation on the tongue and bitterness. The term polyphenol simply refers to a categorization of compounds composed of many phenolic groups, hence the name poly-phenol. These compounds are plant metabolites produced as a defense against insects and other animals, and they are the most abundant compounds in tea. Polyphenols comprise as much as 30–40% of freshly plucked tea leaves and solids in tea liquor1. Polyphenols are derived from amino acids via sunlight, and therefore tea grown in the shade has a smaller concentration of polyphenols and a higher concentration of amino acids.2 The bud and first leaf have the highest concentration of polyphenols, and polyphenol levels decrease in each leaf moving down the plant3. There are an estimated 30,000 polyphenolic compounds in tea4.There are several known categories within polyphenols. Flavonoids are arguably the most important category; they are the reason for many health claims surrounding tea because they contain antioxidants.

Within the flavonoid group are flavanols, flavonols, flavones, isoflavones, and anthocyanins. Flavanols (short for flavan-3-ols) are the most prevalent and thus the most studied. Flavanols are often referred to as tannins or catechins. The major flavanols in tea are: catechin (C), epicatechin (EC), epicatechin gallate (ECG), gallocatechin (GC), epigallocatechin (EGC), and epigallocatechin gallate (EGCG). EGCG is the most active of the catechins, and this flavanol is often the subject of studies regarding tea antioxidants.

Flavanols are converted to theaflavins and thearubigins during oxidation. They are the compounds responsible for the dark color and robust flavors that are present in oxidized teas.

Flavonols, flavones, isoflavones and anthocyanins are thought to contribute to the color of a tea’s infusion and its taste.

Tea leaves contain many amino acids, the most abundant of which is theanine. Theanine, specifically L-Theanine, is responsible for promoting alpha brain wave activity and a feeling of relaxation. L-Theanine in concert with caffeine can induce a state of “mindful alertness” in the tea drinker. Amino acids make up an average of 6% of the extract solids in steeped tea1.

Polyphenol oxidase and peroxidase are the most important enzymes in tea leaves. They are responsible for the enzymatic browning of tea leaves that takes place when the cell walls in the leaves are broken and the polyphenols are exposed to oxygen – otherwise known as oxidation. These same enzymes are responsible for the browning of apples, potatoes, avocados and bananas. Polyphenol oxidase and peroxidase may be denatured or deactivated using heat so that browning cannot occur. In fact, this is one of the first steps in green tea production; it is why finished green tea leaves remain green (and why cooked apples or potatoes remain white). Polyphenol oxidase and peroxidase are deactivated and thus rendered inactive at around 150 degrees Fahrenheit. The enzymes may also be deactivated by simply depriving them of moisture for a time; this is what happens during the long withering period in white tea production.

Plant pigments give leaves their color and are responsible for absorbing light for photosynthesis. There are two major groups of pigments in fresh tea leaves: chlorophylls and carotenoids. These pigments condense during withering and oxidation, causing them to become darker. During oxidation, green chlorophylls degrade and become black pigments known as pheophytins. This degradation leads to the dark appearance of finished oxidized teas. Tea carotenoids, another pigment group found in tea leaves, can be characterized into two smaller groups: orange carotenes and yellow xanthophylls.

During processing, carotenoids degrade into many derivative compounds that provide flavor in the cup. The most important and widely studied of these compounds is damascenone, which lends itself to the sweetness of a finished tea8. Because carotenoid levels decline during oxidation and are higher in more mature leaves often used in wulong production, wulongs contain the highest amounts of demascenone.

All plants store energy formed during photosynthesis in starches and sugars, otherwise known as carbohydrates. Plants later use this stored energy to fuel important reactions. In tea, carbohydrates help fuel the enzymatic reactions that take place during oxidation and are also responsible for the creation of polyphenols in young tea leaves. Carbohydrates make up on average 11% of extract solids in steeped tea1 and consist of monosaccharides, disaccharides and oligosaccharides9. These carbohydrates lend to the sweetness of the tea liquor.

The main methylxanthine in tea is the stimulant caffeine. Other methylxanthines found in tea are two chemically similar compounds, theobromine and theophylline. The tea plant creates these chemicals as a way to ward off insects and other animals. On average, methylxanthines make up 2% to 5% of the dry weight of the fresh tea leaves5. Methylxanthines also contribute to a bitter taste in the tea infusion. The level of methylxanthines in tea depends on the variety and cultivar of Camellia sinensis used, the climate, the age of the leaves, and the propagation method (seed vs. cutting) used on the plant.

28 mineral elements have been found in tea leaves5. Compared to other plants, tea contains high amounts of fluorine, manganese, arsenic, nickel, selenium, iodine, aluminum, and potassium5. Of these minerals, fluorine is the most studied. Fluorine, often used to prevent tooth decay in humans, can cause fluorosis if high levels are consumed. The abundance of minerals in a tea flush varies greatly with each harvest, and their levels can also change greatly during processing.

Uncovering the secrets of tea – http://www.rsc.org/chemistryworld/2012/11/tea-health-benefits

Start typing to see products you are looking for.

There are no more items in your cart