In the tea cultivation countries, generally only the upper leaf bud and the next two leaves, the youngest ones of a spout ("two leaves and a bud") are plucked. Further, i.e. older leaves than these generally have a negative influence on the quality of the finished tea.
In the higher up, cooler regions, the tea naturally grows slower. This enables the particularly fine, automatic character to enfold. The harvesting time also has a significant influence on the quality of the tea. The plucking requires a large amount of care as well as skill and is often done by women. The average plucking capacity amounts to approximately 16 - 24 kg of green leaves per day. This amount yields 4 - 6 kg of finished tea. Two to three times a day, the green leaves are transported to the factory on the plantation. The green, fresh leaves are still entirely neutral in scent and first have to be treated in the tea factory, passing through various production steps, in oder to create an aromatic tea. 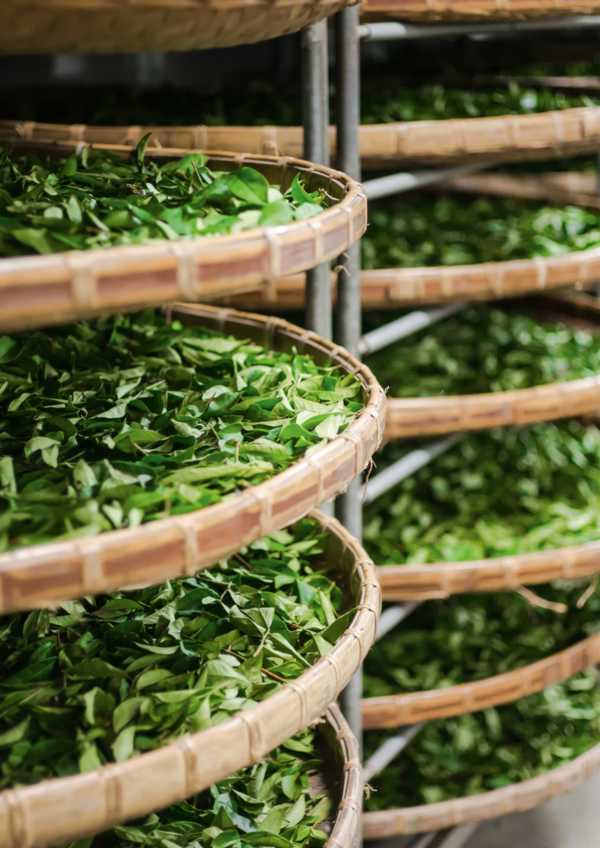 As opposed to coffee, which is imported as green coffee and receives its final form in the country of consumption via sorting and roasting, tea is already processed on the plantations in the country of orgin and then exported in its final form. The most important phases of the treatment with respect to orthodox tea production (which can be used for the production of any type of tea desired as opposed to the later explained CTC production) are: withering, rolling, fermenting, drying and sorting into leaf and broken grades, i.e. sizes.

When the fresh leaves reach the factory, they are weighed and the amount is registered. Next, the withering process is commenced where the humidy content of the leaves is reduced by about 30 % in order to make them soft and flexible for the subsequent rolling. The withering takes place in special withering throughs of a length of 25 - 30 m, which are stringed with a wire grid and ventilated with large fans. The leaves are spread out on the grid. The air, which moves through the ventilators, can also be heated if required due to higher humidity content of the leaves. The withering process takes 12 - 18 hours.

Subsequently, the withering green leaves are rolled in large rolling machines. These generally conist of two large, heavy metal plates, which are rotating against each other and are hereby breaking open the cells, bringing the cell fluid into contact with the oxygen in the air. This introduces the fermentation as well as the development of the essential oils, which then determine the scent and the flvour of the teas. The rolled tea, which now already starts to ferment, is brought into the fermentation room. Some tea factories subsequently use a so-called "rotorvane" machine, a type of shredder, which further processes the leaves. Here, the leaves are moved across a slowly rotating screw conveyor through a cylinder into which oxygen is introduced in order to accelerate the fermentation.

The fermentation is an oxidation and tanning process of the cell fluids, which have been released during the rolling. For the fermentation, the leaves are spread out on tables in layers of 10 cm. In modern factories, spraying water from rotating ventilators humidifies the room in which the fermentation takes place. During the fermentation - which takes 2 - 3 hours - the leaves change their colour, which gradually becomes a copper-red. This colour is found again in wet tealeaves of the infusion. The "tea maker" needs to constandly monitor the degree of oxidation, particularly whith respect to the scent of the wet leaves. The quality of the finished tea is very much dependent on the correct fermentation.

The fermentation is finished when the desired grade of fermentation is reached, i. e. as soon as the tea has developed its typical smell and the copper-red colour is dried. For this, so-called tiered dryers are used which are fuelled wiht wood or oil. The tea is moved through the dryer on a conveyor belt. The starting temperature amounts to 90°C and binds the cell fluid firmly to the leaves. Towards the end of the 20-minute long drying process, the temperature decreases to 40°C and the humidity content to approximately 6%. Later, when the tea is infused, the cell fluid, which stuck to the dried leaves, is solved in the hot water and produces the aromatic and invigorating drink.

The black tea, which is released by the dryer, is the so-called raw tea, which is now sieved via a number of shaking, mechanical sieves wiht varying sieve sizes with which the common leaf grades are separated from each other.

Depending on the sieve sizes, sorting generally yields the following grades:

Generally vaild: the smaller the leaft, the stronger the infusion.

Tea is a natural product, which is made durable by reducing its humidity content. It should be stored in a cool and dry place. The tea retains ist original taste when kept in a tightly closed container, away from strongly smelling foodstuff such as spices.

Green Tea differs from black tea simply by it not being fermented, i.e. not altered by oxidation. The production process is generally the same until after the withering. During the green tea production, the tea tannins and enzymes are destroyedvia steam treatment or roasting after the withering, before the rolling starts - the tea is "steamed" or "pan-fried" and then rolled and dried. This ensures that the leaves are not coloured copper-red like the black tea leaves, but remain olive-green. The infusion varies depending on the variety, cultivation area and plucking period and can be anything from light yellow to dark green.

This method starts by withering the green leaves, then rolling them once before they are torn in the CTC machine 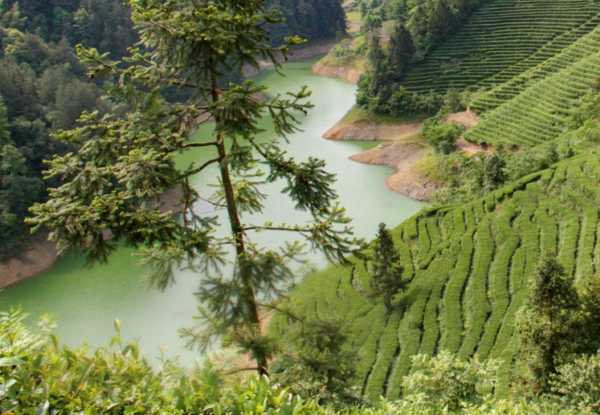 in between thorned rollers. This ensures that the cells are broken up more thoroughly and quickly than in case using the orthodox tea production. CTC tea is of a more intensive colour and is higher yielding. The stems and leaf ribs are extracted to a large extent and only the cut "flesh" of the green leaves is processed further. Afterwards, the tea is brought into the fermentation room. Depending on the desired leaf siez, this process is repeated several times.

During the CTC-Production, mainly fanning is produced, no leaf teas and only very few broken teas. Therefore, CTC teas are very suitable for tea bags. Nowadays, tea in India is already produced to 50% and tea in Kenya almost to 100% using the CTC method. In Darjeeling, however, only orthodox tea is produced.

The most important grades are:

Differentiation According to Leaf Sizes

Generally it is differentiated between leaf teas and broken teas. The small-leafed broken teas, which are cut during the repeated rolling, are naturally very high yielding. The names of the grades are often very imaginative and vary even from plantation to plantation. They are always an expression referring to the leaf size and optic and only to a lesser extent do they address the taste (e.g. flowery), never, though, can they inform about the general quality of the tea. The quality judgement of the teas offered is always made during the tasting.

Below the most important grades for:

In Darjeeling also Golden Flowery Orange Pekoe = GFOP and Tippy Golden Flowery Orange Pekoe = TGFOP. This refers to a thin, wiry leaf with tips. Tips are the golden or silver-coloured, visible leaf tips (buds), which contain less tannin and, hence, do not darken during the fermentation. They indicate that young tealeaves were used; however this is not necessarily a determinant of exceptional quality.

A long, wiry leaf, larger than the FOP. The meaning of the term is unknown. Orange refers to the Dutch "Oranje", which means "royal".

This grade refers to the larger and very aromatic qualities of the small-leafed teas. A well-structured, well-rolled leaf with many tips, which yield an attractive appearance.

A very fine and strong tea, especially with respect to Assam.

A well-structured leaf, which has fewer, tips than the FBOP, but is stronger and less flowery.

On some plantations in India, this is the explanation for the FBOP, in Ceylon it is, however, a "semi-leaf tea", a grade, which is between the OP and the BOP.

With respect to the CTC method, BP is a grade, which yields a very strong cup.

The smallest parts of the leaf, without the stem of ribs, which are collected during the sieving. Fannings and Dust are high yielding, strong, colour the cup quickly and, hence, are preferred for use in tea bags.
Explanation of the abbreaviations considering some examples: